Heather Brown at the Odaiba Hawaii Festival in Japan

It is an early Saturday morning here on the North Shore of Oahu and the sun is just starting to creep up over the mountains and show us if the surf will be fun or not today! The anticipation!! We have been blessed the past few weeks with late season fun swells here so it has been nice to be getting back in the water after some time in the mountains.

I have also been so busy preparing for my first of two Spring Tours in Japan coming up. The first one starts later on this week!

On my first Spring 2013 Japan Tour I will be having 3 shows:

Saturday April 27, 2013 at the Odaiba Hawaii Festival
Sunday April 28, 2013 at the Osaka Takashimaya
and Monday April 29, 2013 we will be celebrating the 4 year anniversary of the Heather Brown Gallery in Daikanyama, Tokyo!!

Last year I was asked to create the art for the Odaiba Hawaii Festival and I was totally honored as this is the largest Hawaii festival in the world showcasing Hawaiian music, hula, art, food and culture to hundreds of thousands of people over a week period.

This year, I was thrilled to be asked once again to create the art for the festival as well as have a pop up gallery there for the week! Here is a peek at the poster that I created for the 2013 Odaiba Hawaii Festival "Aloha, Together" the piece is also being released as a limited edition giclee titled "Waikiki Holiday" that will be available at my Japan tour then everywhere on April 27, 2013. 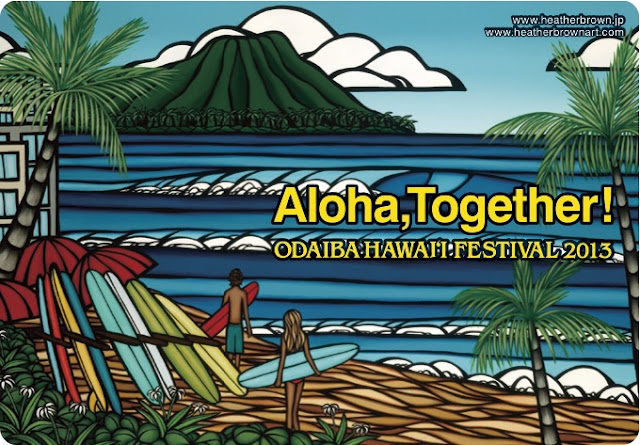 To make it even better, one of the main sponsors of the Odaiba Hawaii Festival is Hawaiian Airlines and they so generously gave Chris and I First Class tickets on Hawaiian Airlines to get to the big event!
Big Big Mahalo to Hawaiian Airlines for helping to put on such a great event as well as get us there in style!

It is always really fun to me as an artist to be able to create art for events like this or larger scale installations as it still is so odd to me to see my art used in these ways and makes me almost cry each time I see it still! I still can not believe it!! 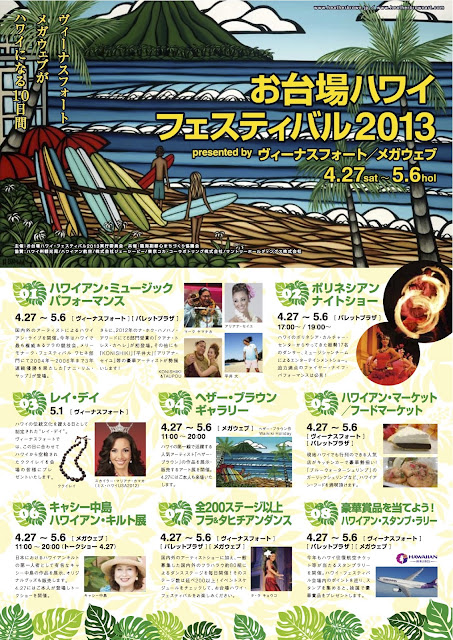 Wow! So excited that after all this time and voting and raising awareness for the Hawai'i Kokua Foundation that we received enough votes to WIN $10,000 for the Kokua Foundation in the Verizon and Modern Luxury Hawaii 4G4HopeHawaii campaign!!

First off, I want to sincerely thank all of you who voted and shared and supported this for the past few months, you all are the reason that such a great organization will be receiving this $10,000!! Mahalo! Mahalo!! Mahalo!!!!

And of course, a huge Mahalo to the Kokua Foundation, Jack and Kim Johnson and the whole crew who do such great things for our community and the Earth. Mahalo to Verizon and Modern Luxury Hawai'i Magazine for putting on this even and putting up the $$$, they were so great that even the foundations that did not win received $4,000 each!!! Mahalo to the Republik in Honolulu for hosting such a nice event and bringing the community together to show how we the people work hard for the things we believe in.

And last but no where near least, thank you my new and old friends who i was extremely honored and humbled to be able to have a friendly competition with in this great 4G4HopeHawaii.

Jake Shimabukuro has not only been such a kind and friendly competitor in this competition but I am always honored to call him a friend and have been so lucky in the past years that he has chosen to work with me on his different projects and commissioned my art for his tours. Jake's support of HUGS is nothing short of excellent and it is great to see how he still holds onto such important values in such a super stardom role. Jake is a true gentleman and for sure the best 4 string player I have ever had the honor to watch play!

Jamie O Brien has always been the one I would watch out for when I would be painting in my first little studio at Off The Wall/Backdoor Pipeline. He is so imaginative riding waves, producing great movies and inspiring people to get involved with charities that make sense to them, and he has truly embraced the Mauli Ola Foundation (another foundation I am always so happy to work with) Jamie and Mick have always been so gracious to me and Chris since we moved off the beach to let us come and enjoy the Pipeline spectacle from their lanai, and we love them, they are great people! And with Kala Alexander, our other long time friend accepting for Jamie and always pushing the Mauli Ola Foundation further ahead, this was a great team.

I was able to make a new friendship with the extremely popular and talented actress from Tru Blood fame, Kristina Anapau! I was so nervous to meet a real movie and TV star, but quickly realized how completely grounded and humble Kristina is and hit it off immediatly. Kristina also impressed me so much for her unbelievable support of her foundation (another one I support deeply) Stand Up For Cancer.

Posted by Heather Brown Art at 11:29 AM No comments: