Aloha!
Here are a few pictures from the 2010 Rell Sunn Aloha Jam.
The event was held on 11/28/2010 in Waimea Valley and it was beautiful. Rell's daughter, Jan and her family tirelessly work to put this event and the Menehune Surf Event on every year following Rell's commitment to the community and keiki.
The event was full of great music, dancing, art ( I donated a giclee for the silent auction) great food and a virtual who's who in the surf community. The MC's were Freddy P and Mark Cunningham, and they did a great job including the live auctions at the end.
It was such an honor to watch Cyril Pahinui play traditional Hawaiian music and the Dance Troop was so great, I could have watched them all night long! Mahalo to Jann and the Ohana for inviting me to be a part in this great event!
If you do not know who Rell Sunn is, here is a little on her:

Often referred to as the "Queen of Makaha," Rell was the quintessential water-woman, excelling at all watersports, including surfing, bodysurfing, spearfishing, and open-water outrigger canoeing. In the early 70's, Rell was instrumental in establishing the Women's Professional Surfing Association and founding the women's pro surfing tour in which she twice finished third in the year end rankings.  Despite all of her accomplishments, Rell Sunn remained a completely humble and unselfish person, and might easily have been called the "Queen of Aloha" for the spirit she carried with her, and the enthusiasm she devoted to every aspect of her life.

Posted by Heather Brown Art at 10:55 AM No comments:

2010 Annual Surf Art Show at The Wyland Gallery in Haleiwa

Aloha!
Last night was the Annual Surf Art Show at the Wyland Gallery in Haleiwa. It's an annual event every Triple Crown season that brings together some great Surf Artists for a really fun group show. This year the event was packed! So many people, locals and tourists alike, filtered through the gallery for the event and many went home with new art from one or more of their favorite Surf Artist's. I painted a bunch of new originals for the show and I had such a fun evening, thanks to all that came out!
Now to get ready for the Rell Sunn Jam in Waimea Valley tonight!
Here are a few pictures from the evening.

Well yesterday Chris and I snuck off for a bit to go see the 2010 Reef Haleiwa Pro day 3. Our great friend Skil Johnson hooked us up with some great VIP seating and we watched some unbelievable heats including Joel Parkinson's first heat back in competition since his nasty ankle injury, and he scored 1 perfect 10 followed by a 9.87 to win the heat with another favorite surfer of ours from Kauai finishing second to get through to the next round, Evan Valliere. We also got to watch Occy in his heat. It was fun and exciting and probably the last day of good weather for a few days!
Here are a few pictures from the day, I even got to take a picture with Rabbit Kekai! A true Hawaiian Legend. Mahalo to Reef, Haleiwa and Mr Haleiwa, Skil Johnson for a great day!

Posted by Heather Brown Art at 2:35 PM No comments:

Well, I have been working ferociously on new paintings for the Annual Surf Art Show at the Wyland Gallery in Haleiwa, I decided I would put up a new original for everyone that could not attend on the 27th.
Here is a picture of the new Heather Brown Surf Art Original. It is a 12"x16" acrylic on canvas

So much fun last night at the John Kelly Awards held in Waimea Valley! Big congratulations to Mark Cunningham for his Lifetime Achievement Award, Duane DeSoto for the Pro Surfer Award and The Weekly for the Hawai'i Business Award! The event was sol out and there was such a great turnout of great people, companies, artists and musicians. Paula Fuga played and it was so great to hear her voice resonating through the valley and for a special treat she invited Jack Johnson on stage for a few songs too!
I forgot my camera, as is usually the case, but we got a few bad quality pictures on my iPhone to share.
It has been such a busy weekend already with Rex Dubiel's literacy event at Waimea Valley on Friday night with the showing of Fiberglass and mega pixels, The John Kelly Awards and today is the two Clark's show at the Wyland Gallery in Haleiwa featuring the surf art of Clark Takashima and Clark Little. The North Shore Season has definitely begun in full swing!

WOW!
What a great welcome home it has been this week. I got to surf everyday so far and it has been so much fun! I teamed up with a new company that makes bamboo skateboards recently and I received them just before my trip to Japan, so I painted on 3 of them. They were such a hit as they have always been in the past, but I have gotten so many requests and comments on them that I figured I would post some clear pictures of each one. I am really happy with how they came out, would be a really cool set too, but they sold individually. I will have more painted for the Surf Art Show at the Wyland Gallery in Haleiwa on November 27th.
Hope everyone has a great day!!
Aloha
Heather

Posted by Heather Brown Art at 9:57 AM No comments:

I am back in Hawai'i now and even got to get a fun surf in at Chun's this morning as a nice welcome home!

The last show I had when I was on "The Heather Brown Fall Surf Art Tour" was at a great friend of ours restaurant in Yokuska called Kaneyo. Jon is the man behind the magic here. He held the first one last year and it was a blast and this years was even bigger. Great food, music, art and people. It really felt like being at home in Hawai'i.
Here are some pics from the event. I hope you enjoy them!

Posted by Heather Brown Art at 6:12 PM No comments:


WOW!!!!! What a show! The Heather Brown Art Show at Mu'umu'u Heaven in Kamukura was great! SO busy, so many old friends and fans and so many new ones too!
The store is so beautiful and the staff and people were so friendly and helpful. Here are a few pictures from the show.
Today I am off to "Art on the Beach" at Kaneyo at Hashirimizu Beach in Yokosuka Japan. If you are in the area you should really come on down, last year was so much fun with art, music, fire dancing, great food and drinks as well.
Aloha!

I had a great show yesterday at the Patagonia shop in Shibuya, Tokyo! Everyone there is so stoked on surf art, surf culture and showed so much Aloha to me and the big crowds of people.
The store itself in unreal! 4 floors of merchandise and the top floor called the "Patagonia Ocean Floor" really had a great feel and made me feel like I was back home on the North Shore. It has been quite a hectic schedule since I have been here, but I am so lucky to have such great people taking me all over the place and showing so much love and aloha. I have attached a few pictures of the set up of the show for you all to see. Big Mahalo's to all that came out for the show, and if you are in the area today, I will be at Mu'umu'u Heaven in Kamakura for another show!
I hope you enjoy the pictures. Aloha! Heather

Posted by Heather Brown Art at 4:00 PM No comments:

Aloha!
Wow, what a full day! So tired now but I wanted to share a few photos from today for anyone who missed out.
I had a great show at my gallery in Aoyama today, so many great fans and friends came out to support me and my art, I am so thankful!
After the show I was taken to Samudra Surf Shop to do a radio interview for a Japanese radio station that is popular with the local surfers. The interview will be aired tomorrow morning. The shop had the cutest dog named Wax, he sat on my lap during the interview to keep me company.
Here are some pictures from the day.
11/5/2010 show at the Patagonia shop in Shibuya, Tokyo

I forgot on my last post, mmmmmmmm, Giro Giro in Kyoto, one of my favorite restaurants in the world!!!
I would love to explain more in words, but a lot is lost in translation. one word....ONO!
Here are some pictures of my first nights welcome meal in Kyoto. They will soon open a Giro Giro in Honolulu!! 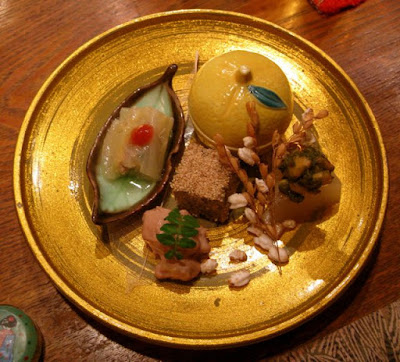 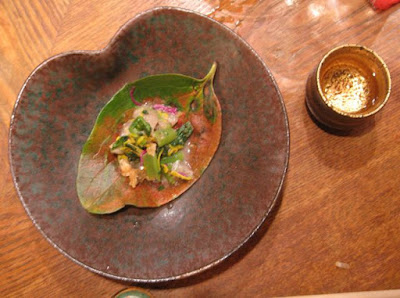 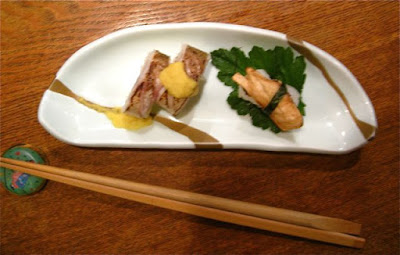 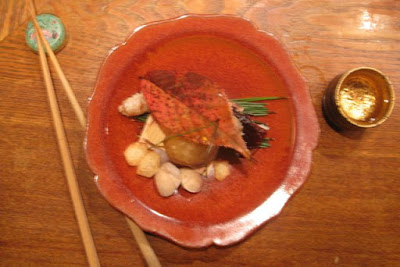 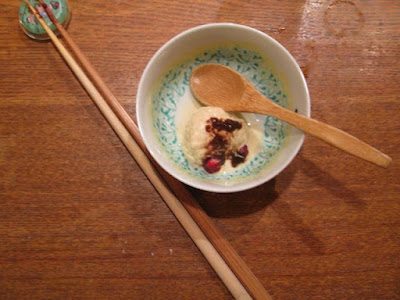 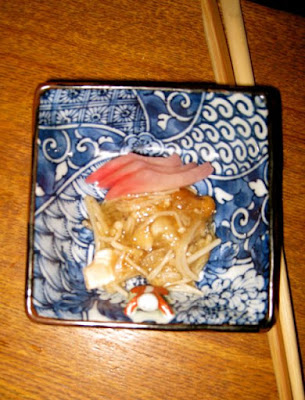 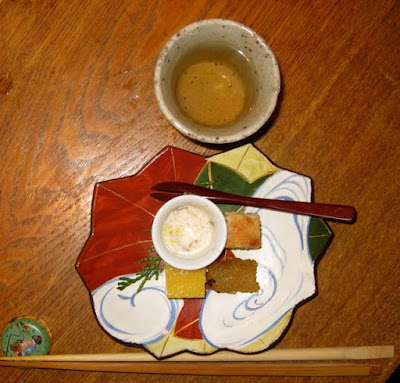 Posted by Heather Brown Art at 6:50 PM No comments: